The Bundesrat is the federal element in the legislation (Article 50 GG). 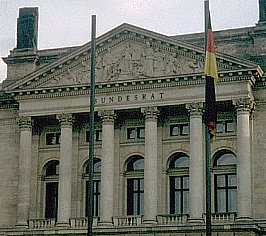 Contrary to the delegates of the Bundestag the Members of the Bundesrat are not elected by the people, but they are members of their federal state government (for example Prime Minister, Minister) and sent by this.

They will be send to the Bundesrat by majority decision usually for the duration of their affiliation to the federal state government and they could be replaced by other members of their government.

They are not free and independent with their casting of votes contrary to the Members of the Bundestag, but bind to the instructions of their federal state government (imperative mandate). They may not belong to the Bundestag at the same time (incompatibility).

The Bundesrat has contrary to the Bundestag no Legislative period, it is a so called "eternal Federal organ". Parts of the Members of the Bundesrat change if in one of the Laender a new government is elected.

In principle the Bundesrat decides its resolutions with absolute majority, that means with at least the majority of its legal votes (Article 52 III S 1 GG).

The Bundesrat is able to make a decision, if more than half of its members are present.

During the election the votes of a Land can be delivered only uniformly and only by present members or their representatives, thus by cabinet members, (Article 51 III S 2 GG). A member can give on behalf all votes of the Land.

Each Land may appoint as many members as it has votes. The votes of each Land may be cast only as a unit and only by Members present or their alternates.

In the event of constitution-changing laws and at the accusation of the Federal President a twothird majority is necessary (Article 79 II GG, Article 61 I GG).

Organization (Article 52 I and II GG)

The Bundesrat elects a president for one year from its members (Article 52 I GG). Usually an Prime Minister of one Land.