The Bundestag is the parliament elected directly by the people. 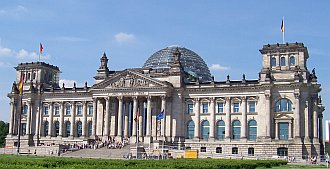 The Bundestag plays the central role in the legislation of the Federation (for example Article 77 I GG), furthermore it controls the government (for example quotation right, Article 43 I GG).

In addition it participates in the election of other constitutional organs (for example Article 94 I S 2 GG), controls through the budgetary law a considerable part of the finances of the Federation and participates in matters concerning the European Union according to Article 23 GG.

Elections to the Bundestag

Members of the German Bundestag shall be elected in general, direct, free, equal, and secret elections. They shall be representatives of the whole people, not bound by orders or instructions, and responsible only to their conscience.

The Basic Law rules that the election to the Bundestag must meet the following five principles:

If these principles, which result from the principle of democracy, are hurt, then the election is invalid, except the election result can not have been falsified by the injury.

The exact election procedure is not regulated in the Basic Law, but in the federal electoral law.

Each voter has two votes. With the first vote he elects a candidate of his constituency (majority election), with the second vote he elects the national list of a party.

For the majority election (first vote) the area of the Federal Republic is divided into constituencies with more or less the same number of voters. The number of constituencies (299) corresponds to the half of the legal number of seats (598 seats) in the Bundestag. Elected is that candidate who gets the most votes in the constituency .

At the elections on the basis of proportional representation (second vote) all candidates of a party are on the national lists in a firm order, specified by the parties and not changeable by the voters. The higher the list place of a candidate the more probably he is successful.

In the Sainte-Laguë/Schepers method first a divisor is calculated through dividing the whole number of secondary votes by the total number of seats.

Then the (secondary) votes of each party are divided by the divisor.

The fractions of the result must be rounded. If they are bigger than 0.5 according to the above, if they are less than 0.5 down. For values ​​of exactly 0.5 it is rounded in a way that the total number of available seats is maintained. If there are several possible combinations lots are drawn.

The rounded results are the numbers of seats of the parties.

Calculate how many seats each party get.

The allocation of seats

During the allocation of seats only those parties are considered, which reached at least 5 percent of all valid secondary votes or however at least 3 direct mandates or represent a national minority ("5 percent - hurdle").

Before the actual election to the Bundestag it was calculated with the Sainte-Laguë/Schepers based on the (german) population of the individual laender (federal states) how many of the 598 seats of the Bundestag are filled from within one land. After the election, the secondary votes of one land are calculated with the Sainte-Laguë/Schepers in minimum seat numbers per land.

If a party on land level wins more constituencies than actually calculated seats due to secondary votes, then these additional direct mandates remain as so-called overhang mandates.

Now, the individual results of all 16 laender, will be added to the nationwide minimum number of seats.

Now the Sainte-Laguë/Schepers is conducted nationwide. The nationwide minimum number of seats is equal to the seats to be distributed. The votes are the nationwide secondary votes per party.

However, the nationwide minimum number of seats will not always be achieved for all parties in this calculation.

Therefore, in this case, the total number of seats in the Bundestag is gradually raised until there is a seat number, in which all parties receive their nationwide minimum number of seats.

Some parties will get more seats by increasing the total number of seats, as appropriate to their nationwide minimum number of seats. These seats are retained them as so-called compensatory seats.

Accordingly, the number of Members of Parliament increases for the duration of the legislative period of the elected Bundestag:

Finally, the nationwide total numbers of seats per party are in turn distributed by Sainte-Laguë/Schepers on the state lists , each party must receive at least as many seats in each land, as it has won constituencies in this land.

At the election to the Bundestag the Sainte-Laguë/Schepers is done not only once but four times.

The legislative period is the period, for which the Bundestag is elected. It lasts 4 years.

The delegates are representatives of the whole people, they are not bound at orders or instructions and only responsible to their conscience (Article 38 I S 2 GG) (independent or free mandate).

Individual rights of the delegates

Talking and voting liberty for official acts of the delegates in the Bundestag, in committee or parliamentary group meetings. That means the delegate may be pulled at no time (Also if he is no longer delegate) for his talking and voting behavior in the Bundestag or the committees for responsibility. Exception: slanderous offenses, Article 46 I GG.

Protection against prosecution (Not irregularities and disciplin proceedings) during the mandate, prosecution only with permission of the Bundestag, Article 46 II GG) exception: When surprising in the act and/or in the course of the following day.

(1) At no time may a Member be subjected to court proceedings or disciplinary action or otherwise called to account outside the Bundestag for a vote cast or for any speech or debate in the Bundestag or in any of its committees. This provision shall not apply to defamatory insults.

(2) A Member may not be called to account or arrested for a punishable offense without permission of the Bundestag, unless he is apprehended while committing the offense or in the course of the following day.

(3) The permission of the Bundestag shall also be required for any other restriction of a Members freedom of the person or for the initiation of proceedings against a Member under Article 18.

(4) Any criminal proceedings or any proceedings under Article 18 against a Member and any detention or other restriction of the freedom of his person shall be suspended at the demand of the Bundestag.